Well, I did it. I started another book.

Since I’m on vacation this week, I decided to dedicate the time to beginning book #3 in The Reinhold Chronicles. I was planning to wake up at dawn this morning and write the opening chapter—which was, by the way, set at sunrise. But plans change. After five and a half hours in the car, a dinner of Mom’s lowcountry boil, and two cups of Starbucks’ cold brew…

The end result was that I wrote until 11:15 last night, and chapter one ended up being set at sunset instead of sunrise. Go figure. 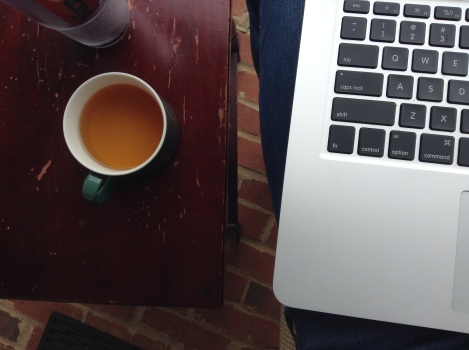 Not a picture from last night. It’s from a few weeks ago, but I needed a picture for this post, so there you go.

If all goes well, I’ll have all three of these volumes completed before I publish the first one. A little weird? Maybe, but I can’t exactly help myself. I have to write them. Still, I can’t wait to share this world and its characters with the world.

Book three is probably going to prove the hardest to write. It’s longer, more complex, and is physically and emotionally brutal. This is the third act. This is the climax.

But I’m not there yet. Just one step closer.

(So, I thought I’d add a little postscript detailing my current soundtrack and tea of choice for writing.)

7 thoughts on “Chapter One” strange that we only sometimes describe life as being “like something from a movie” when every day is full of story structure: characters. turning points. beginnings. endings.
Rufus’s primary hobbies include posing in front of bookshelves and sitting on my keyboard while I’m trying to write.
when you write a whole trilogy of books with a main character named Arliss
I haven’t done any writing in quarantine. This can be majorly depressing for someone who’s both creativity- and achievement-driven, but I have to remind myself that no time is wasted. I’m leaving this season with *lots* of new book ideas: one funny, one ambitious, one heavy & cathartic.
faintly dystopian
because these are probably more interesting than that to-read stack you still haven’t gotten to